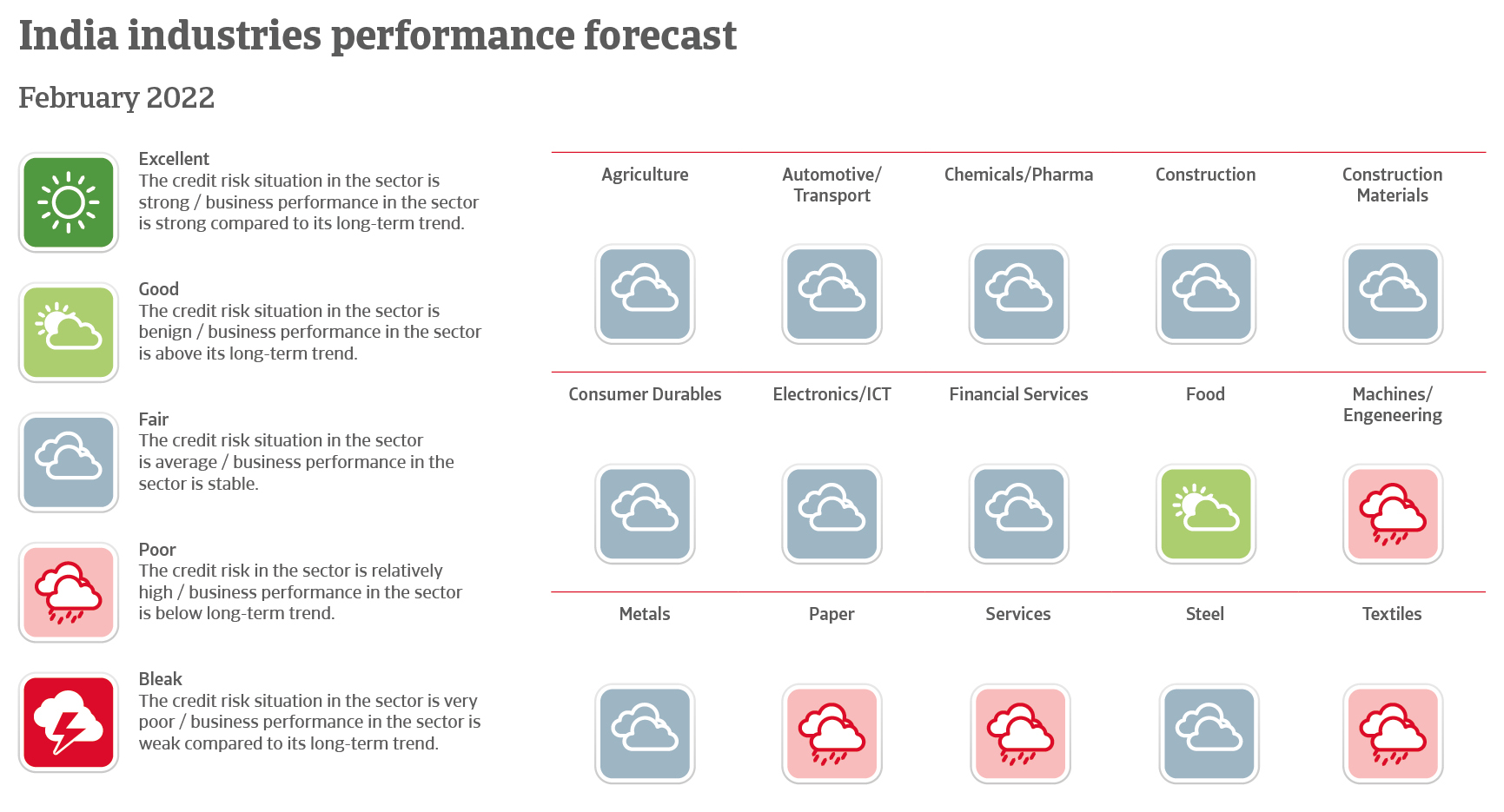 Government still in a strong position, but slowdown of reform efforts

Prime Minister Narendra Modi and his government remain in a strong position. Modi’s Bharatiya Janata Party (BJP) has an absolute majority in the lower house of parliament, and the opposition remains weak on the national level. While the handling of the second coronavirus wave in early 2021 has dented Modi´s popularity somewhat, a rising vaccination rate should help him to retain his dominant position in Indian politics.

With legislative elections in several states coming up in 2022 and 2023, Modi will most probably avoid any initiatives that could weaken popular support for the BJP. Therefore, we expect the reform agenda to slow down further. After mass protest throughout last year, in November 2021 the government decided to abandon controversial agricultural reforms. Additionally, after protests of some trade unions the administration postponed the enactment of new labour laws. Those aimed at increasing flexibility in the labour market, and to attract more domestic and foreign investment.

On the international level, relations with China remain strained. After violent clashes at the common border in June 2020, both sides have held several rounds of talks to solve the boundary dispute, but no agreement has been reached so far.  New Delhi has further deepened ties with the US, Australia and Japan, sharing with them the strategic interest in balancing China’s growing influence in South Asia and the whole Asia Pacific region. The relationship with Pakistan remains tense, mainly due to the long-lasting conflict over the Kashmir region.

India's economy rebounded by 8.2% year-on-year in 2021, after a severe 7.0% contraction in 2020. Coronavirus-related lockdowns and disruptions still hampered growth in H1, but with the easing of restrictions economic activity has picked up again since H2 of 2021. Lower interest rates, higher government spending, and an accelerated vaccination rollout have supported domestic consumption.

In 2022, Indian GDP is forecast to increase by about 8%. However, downside risks remain to this outlook, mainly due to the current spread of the Omicron virus variant in India. Despite the aim of the government to complete the vaccination rollout by the end of 2021, as of December 31 only 64% of India´s adult population was fully vaccinated. Over the coming months, India´s economic growth momentum will depend on the ability to curb the coronavirus spread and to vaccinate the remaining population, including minors.

Currently we expect that domestic consumption growth will gain momentum after Q2 of 2022, given that about 80% of the population will be fully vaccinated at that time. This should support private consumption, expected to increase by more than 10% this year. Investment has strongly rebounded by more than 16% in 2021, expected to increase further in 2022, by about 7%. However, with the manufacturing capacity utilization rate still 20 percentage points below optimal level, there are concerns about the durability of the investment recovery. Still weakened balance sheets of businesses and financial institutions alike could result in a slowdown of investment growth.

Due to the improvement in economic activity we have updated our business performance/credit risk situation assessment for electronics/ICT, construction, metals and steel from “Poor” to “Fair” since early 2021 (see chart above). ICT value added output is forecast to grow by more than 9% in 2022. Indian construction is set to grow by about 8% annually in 2022 and 2023. The ongoing surge in construction activity, in particular in the civil engineering segment, is driving demand metals and steel, with output forecast to grow by about 9% and 11% respectively.

Gradual fiscal consolidation about to start

Government finances have deteriorated due to the pandemic, and the budget deficit will amount to about 7% of GDP in the fiscal year 2021/2022 (April 2021-March 2022). We expect that the government will start with fiscal consolidation this year, albeit gradually. Revenues from disinvestments, monetisation of public sector assets and an expanded tax base will probably help to reduce the deficit to 6% of GDP in the fiscal year 2022/2023. Public debt will remain at about 60% GDP, which is high, but not at a worrying level. Government debt is mainly financed domestically, and the external ratings are still investment grade.

A moderate monetary tightening on the horizon

In order to sustain the economy during the pandemic, the Reserve Bank of India (RBI) took measures to sustain the exchange rate and to provide liquidity in the market. Regulations for offering new loans and classifying existing loans were eased. In H1 of 2020, the RBI lowered its benchmark interest rate by more than one percentage point, to 4%.

In 2021, inflation remained within the RBI´s target range of 2%-6%, enabling it to keep its monetary policy accommodative. However, the surge in global energy prices and still ongoing supply side disruptions have started to push up input prices. This will most probably prompt the RBI to trigger a moderate interest rate increase in the course of this year.

We expect a slight depreciation of the rupee against the USD in 2022 and 2023, due to India’s relatively high inflation (forecast 5% in 2022). A gradual strengthening of the USD (in view of a US Federal Reserve´s tighter monetary policy) will also contribute to this depreciation. However, at the same time large foreign exchange reserves will support the currency against major volatility. India´s liquidity situation remains good, with international reserves at almost eleven months of import cover in 2022, amply covering both the external financing requirement and short-term foreign debt. India has an excellent payment record, with no missed payments since 1970, providing it with good access to capital markets.

Still some woes in the financial sector

The Indian banking sector remains under pressure due to a rather high volume of non-performing assets (NPAs). Those are concentrated with public banks, which account for more than 70% of the banking sector. NPAs surged in 2020 due to the adverse impact of the pandemic.

However, government support mitigates risks in the financial sector. In order to strengthen the industry and to improve capital adequacy, ten public sector banks were merged into four with effect from April 1, 2020. The finance ministry infused about EUR 1.6 billion in four public sector banks that are under the RBI's prompt corrective action, in order to improve their financial health. The gross NPA ratio of Indian banks has improved to 6.97% end of September 2021, compared to 7.32% end of June 2021 and 7.36% end of September 2020. However, monetary tightening in 2022 could curb corporate repayment capacities. This would subsequently affect the profitability of banks.

The pandemic is not yet over but economies around the world are learning to live with it.

Asia: half of all credit sales overdue during pandemic

One year into the pandemic, businesses polled in Asia told us they experienced serious setbacks to growth and needed to take several measures to face the changed economic and trade circumstances.